One of my favorite parts of attending a top tournament like Nationals or the US Open is the chance to discover some of the cutting-edge trends in the game.

Like Roger Bannister and the 4 minute mile, the trickle-down effect is amazing when top players prove that something is possible.  Once we see someone do something, then other players discover that they can do it, too, and suddenly, it’s a new standard in the game.

I wasn’t in the game before dinking was “discovered” but I imagine it followed a similar pattern.

I HAVE been in the game since “the Erne shot” and around-the-pole shots have become popular.

They used to be few and far between, but now they are almost standard shots any 4.5+ player must be prepared to receive, if not be able to execute.

Today I want to talk about WHY top players are using the third shot drive instead of the third shot drop, WHEN it makes sense to use it, and how to tell whether it’s something that you should consider implementing in your game.

Now, if you’ve been following me for any length of time, you may already know my take on the drop shot.  If you don’t, you might consider checking out my posts on the Top 3 Reasons You MUST Play at The No-Volley Line (And 2 Lies You Tell Yourself When You’re There) as well as 4 Secrets to Get Your Dropshot to Go Where You Want (and Not Where You Don’t) and What to Do When Your Drop Shot Doesn’t Drop.

But assuming you’ve already read all that, let’s dive in…

Why Players Use the Third Shot Drive

The short answer is:

The long answer is:

It’s never good to be too predictable. At beginner and intermediate levels consistency is generally more important than variability.  At the top levels, consistency is a given, and you want to keep your opponents on their toes.

So it’s good to shake things up now and again, but ONLY, if you have something else to gain by mixing it up. I never recommend mixing it up just for the sake of mixing it up.

In the case of the third shot drive, here’s the ideal scenario: Your opponents are caught off guard and inadvertently pop the ball up, giving your partner a chance to put the ball away. At the very least, your opponents will be on the defense and in the best case, the put-away will end the point in your favor.

The drop shot is ONE way to get your opponents to hit the ball upward, and as another alternative, the third shot drive is simply a set-up shot for hitting the NEXT shot at a sharp downward angle.

So if hitting a third shot drive is such a good alternative to the third shot drop, why don’t I recommend it to my students?

The well-executed drop shot is the fail-proof way to buy yourself time and keep your opponents from being too aggressive while you work your way up to the net. The drive will never buy you time to move up, which is why it will never be a full substitute for the drop shot.

Now, let’s talk about WHEN it makes sense to go for the third shot drive, and when it DOESN’T make sense.

When (and When NOT) to Go for a Third Shot Drive

When you see players at the top levels go for the third shot drive, there are a few things that they have in place which you may not have thought much about. (I talk more about this in my article, Top Pickleball Players: Why They Can Break The “Rules” & You Probably Shouldn’t.)

First of all, teams who use this technique well are generally athletic, quick on their feet, and have quick reflexes.

If you are NOT athletic, quick on your feet, and have quick reflexes, then you should NOT consider going for the third shot drive. (Having had quick reflexes 20 years ago, unfortunately, doesn’t count!)

Additionally, these teams have a strong synergy and a shared game plan. They wouldn’t be going for a third shot drive if they didn’t know for sure that their partner was gonna be up at the net and ready to pounce on the opening

The third shot drive attack ONLY works if your partner moves to the net quickly and is prepared to put the ball away (if it’s high), or hit a drop volley back (if it’s low).

If your partner is not able to control the ball well, then chances are the plan will backfire as your partner pops the ball up and your opponents (who are already up at the net) put it away for the win.

Let’s Bring it Back to YOUR Game…

All that said, let’s bring it back to YOU and YOUR game…

Chances are that the third shot drive is NOT a good strategy to implement into your game.

Then don’t do it.

Then give it a try once in a while to shake things up and let me know how it goes.

In the meantime, if you have any further questions or comments, go ahead and post a comment down below.

Today we’re talking about why you’ll often see that what top pickleball players DO does not always match what I TEACH in my book, clinics and bootcamps. END_OF_DOCUMENT_TOKEN_TO_BE_REPLACED

This week’s episode of Pickleball 411 Features (you guessed it!) Yours Truly Sharing the 3 Most Common Mistakes People Make When it Comes to Keeping Your Paddle Up… 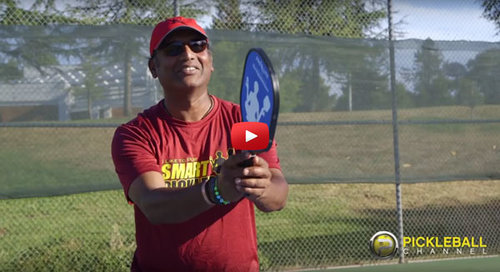 If you aren’t subscribed to Pickleball Channel, do it ASAP!

They produce plenty of more in-depth content but one of my favorite things they do is called “Pickleball 411” where they give you some great pickleball advice wrapped up in just a few short minutes.

If you’ve been part of #GuruNation for any period of time, chances are you’ve heard me discuss this week’s topic of keeping your paddle up before, BUT I am willing to bet you $100 that you STILL aren’t doing it consistently.  END_OF_DOCUMENT_TOKEN_TO_BE_REPLACED

Unless you’ve been living in a bubble, or you haven’t yet reached the advanced stages of the pickleball addiction, you are probably aware that the 7th Annual National Pickleball Tournament will take place in Casa Grande, Arizona next week.

My wife and I competed in the first national tournament. (If you’ve read my book, you know that that’s where we got our behinds kicked!) The rest, as they say, is history.  I haven’t missed a year yet.

I’ll be heading off later this week to teach and compete in what will be the largest, most competitive tournament yet.

If you think YOU put a lot of pressure on yourself to perform well, imagine if you had a following of thousands of people who know you as “The Pickleball Guru!”  It could be a lot of pressure.

And, yet, as you know from the title of this post, I’m prepared to lose and I’m not afraid to admit it.

“The Guru” is going into Nationals prepared to lose??

What kind of mindset it that?!?

END_OF_DOCUMENT_TOKEN_TO_BE_REPLACED

So let’s start with some basics… END_OF_DOCUMENT_TOKEN_TO_BE_REPLACED